The 2022 International Year of the Salmon (IYS) Pan-Pacific Winter High Seas Expedition will be sending multiple vessels into the North Pacific Ocean to better understand the ocean and climate conditions and processes affecting salmon abundance under rapidly changing conditions. As climate change accelerates, the ocean is experiencing more anomalous events, such as increasingly hotter and more prolonged heatwaves, and these can have devastating impacts on salmon. Understanding the mechanisms that regulate these changes is critical. A number of cutting-edge technologies in ocean science will be used during the 2022 Expedition, including environmental DNA (eDNA) and genetic stock identification (GSI). Additionally, gliders will be used to augment ship-based observations.

Gliders are powerful tools that can survey the ocean without having to send people out to sea on ships, which is costly and can be dangerous in storms. Most gliders can transmit data in near real-time through satellites, which allows scientists to investigate phenomena as they are encountered. Gliders can be outfitted with a wide variety of sensors to monitor ocean conditions, such as temperature, salinity and currents. Some gliders can even be outfitted with acoustic sensors which can help detect the size, location and abundance of marine mammals, fish and zooplankton.

Acoustic sensors can work in two different ways. ‘Active acoustics’ functions in the water in much the same way as RADAR works in the air. Sound waves are emitted and they reflect from objects they encounter, such as single fish, groups of fish, plankton or the ocean floor. The time it takes the echo to return tells researchers where the animals are in the ocean and allows them to record and map their distribution. In contrast, ‘passive acoustics’ works by listening to sounds naturally occurring in the ocean. These sounds are then deciphered by scientists to determine what caused them, thereby detecting whale calls or ship noise.

As part of the 2022 IYS Pan-Pacific Winter High Seas Expedition, researchers will be deploying gliders in and adjacent to the survey area to augment data collected on ocean conditions (e.g., temperature, salinity) during the current survey and to test their ability to detect species, using acoustic sensors, that may not be captured or observed by the ships.  Gliders from Canada and the United States will concurrently survey ocean conditions in the Northeast Pacific.  The Canadian gliders will sample along a transect (Line P; Fig. 1) that has been studied for decades, from the Canadian coast to Ocean Station Papa in the Gulf of Alaska, as well as potentially deploy gliders from the Canadian research vessel.  This will allow for a comparison of ocean conditions seen during the expedition to the historic time series and potentially show how glider observations can be coupled with data collected on ships to gather even more information on our changing oceans.

The University of Alaska Fairbanks operates one Slocum glider that collects active acoustic data in addition to standard ocean condition data, and a second glider that records passive acoustic data. These two gliders will follow a zig-zag route along the ocean shelf and slope in the northern Gulf of Alaska between February and May of 2022 (Fig. 1). In addition to augmenting the data collected on the ships, the work will begin an assessment of whether these acoustic sensors can identify salmon and associated predators and prey.

These ocean robots are rapidly evolving and becoming more capable and will unquestionably be a large part of the solution to cost-effectively monitor and understand what is happening to ocean ecosystems and to salmon.

You can learn more about this exciting technology by joining our upcoming seminar... stay tuned for details! 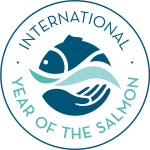